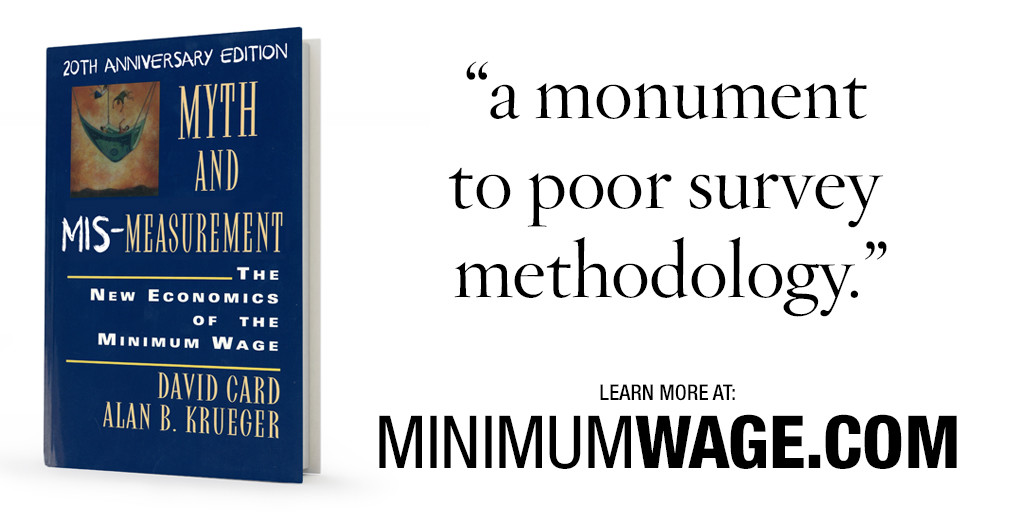 It’s a convenient story for proponents, but it’s also incomplete: This infamous study was eventually refuted in the same academic journal where it was originally published. In the Wall Street Journal today, we make this point in a full-page ad:

After the minimum wage hike, the economists and their student researchers conducted telephone surveys at fast food restaurants to compare localities in New Jersey –  that now had higher labor costs – with similar localities right across the river in Pennsylvania. Unfortunately, the research assistants working for the economists had posed questions to restaurants that were too ambiguous in their phrasing: “Full-time” and “part-time” employment weren’t defined. The type of burger the researchers were seeking a price for wasn’t described either.

As a result, the data showed unrealistic changes in employment in stores—75 percent decreases in part-time staff, for instance, and an increase in full-time workers from 0 to 35 in a single year. At one outlet, they reported an 88 percent increase in the price of a hamburger. When the study was later re-estimated using payroll records rather than the original faulty telephone surveys, the data told a different story: New Jersey’s decision to increase the state’s minimum wage in 1992 had in fact caused job loss.

Read the full story in our op-ed in The Hill.

About Those Economists Who Support Cuomo’s $15 Wage Proposal